2015 was the year of the "Great Turkey Experiment".  We started with twelve little balls of fluff the beginning of May and concluded with eleven freshly dressed turkeys chilling in a kiddie pool about seven months later. Even raised on pasture, turkeys consume a lot of grain and require daily shelter moves frequent rotations of their paddock. A few adventurous ones would fly over the electric netting and roam the farm until we rounded them up and herded them back home. Most days the rogue escapee would hop themselves back in as the sun was going down. They enjoyed each other's company and instinctively roosted together on top of their shelter at the end of the day.

I was confident I could provide the daily care of these birds, but I knew I could not butcher them. Fortunately one of our Amish neighbors, Mr. Stutzman, agreed to perform the deed the Tuesday before Thanksgiving. On Monday night we all walked quietly into their pen under the light of the full moon and calmly caught each one and ushered it into a large dog crate. On Tuesday morning Elliot and I loaded them into the back of the truck and delivered them to the Stutzman's - a mere mile away. We returned five hours later to catch David and his wife bagging the last of the birds. They looked enormous and impeccably done. I was thrilled!

We raced home to weigh them and get them on ice as pick-up time was looming. The four hens ranged in size from 7 - 11 pounds and the seven toms were between 16 - 18 pounds. Fortunately there were turkeys to meet the requests of all of the customers. Pick up went smoothly and everyone hefted away their farm-fresh turkeys in good spirits. I was relieved, but still anxious about the final test. How would they taste? After all those months and for the price of $6/lb, I wanted them to be the best turkeys they had ever prepared!

On Thanksgiving Day, the reports started trickling in. Here are some customer photos and feedback. 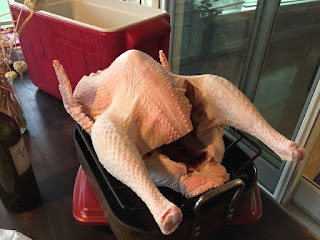 The legs were much longer than a "regular" turkey. The proportion of white meat to dark meat was much more even. This is due to the fact that they lived a typical turkey life strutting around and getting daily exercise. 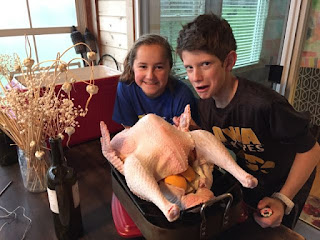 Many used the giblets for stock and stuffing. 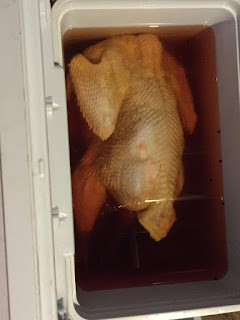 Several customers brined their birds with the typical salt and water then added other ingredients like peppercorns and brown sugar to enhance the flavor. 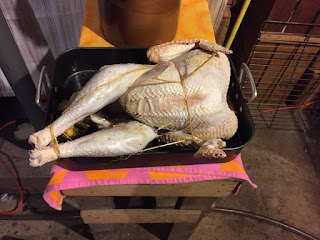 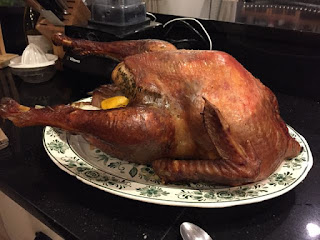 Here's an amazing trussing job, straight out of the Joy of Cooking!

Most agreed that the cooking time was much shorter than a store bought bird. Watching the temperature of the turkey seemed to be more critical than watching the clock. 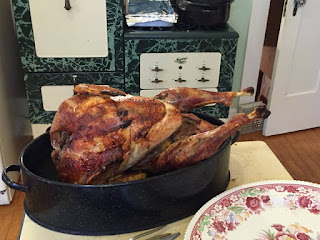 Everyone assured me they would buy another bird next year. 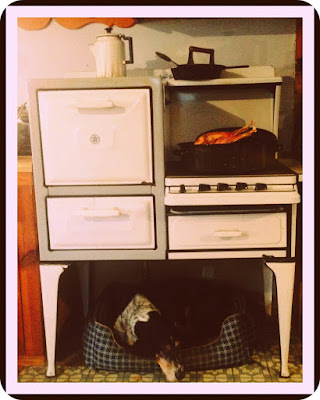 Was it a success? Yes. Did I make money? Well, yes - if you consider $2/day fair compensation. As with many projects on the farm, it was more a labor of love. I told my family several times over the months - mostly when herding pooping turkeys off the deck- to smack me over the head if I mentioned turkeys again next spring!

When you are able to raise such an amazing bird and put delicious local food at the center of a holiday table, you start to forget the challenges.

There are some things I need to tweak and I had to turn many people down. But this winter will give me a chance plan for next year's batch!


Thanks to Laura Wolf, Bonnie Riggan & Mike Havercamp for sharing your dinners with us!

Posted by The Golden Egg at 1:44 PM No comments:

Find us on social media!

The Golden Egg
We live on a 20 acre farm with a flock of layers on the pasture, turkeys for Thanksgiving, a handful of goats and a llama.