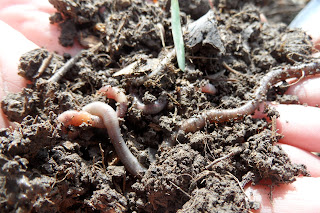 Earthworms might be slimy and gross, but they are handy dandy helpers!
We recently got two large containers of red wigglers from our friend, Rhonda.  We set them up in our worm composter and they are at work right now breaking down banana peels, egg shells and coffee grounds and turning them into wonderful compost!
When we planted peas and potatoes last week, we saw lots of squirmy wormies at work in the garden too!
Did you know that worms have no gender?!  They also lack legs, eyes, ears and teeth.  They do have lips if you can figure out which end they are on!  The head end is usually darker and pointier.
Red wigglers and earthworms are segmented worms.  Their body looks like it is made of rings. Each segment has four grippy bristles on the underside to help them move.
Since they have no eyes or ears, they have cells in their skin that are sensitive to light, vibration and touch.  When a bird or mole tries to eat them, they insert their bristles into the ground to try to win the tug of war.
Sometimes in the battle they get torn in two, but never fear! The mighty earthworm is able to grow a new tail!
Thanks to worms, our soil is rich, aerated and healthy – perfect for little seedlings!
Posted by The Golden Egg at 9:29 AM No comments:

Find us on social media!

The Golden Egg
We live on a 20 acre farm with a flock of layers on the pasture, turkeys for Thanksgiving, a handful of goats and a llama.